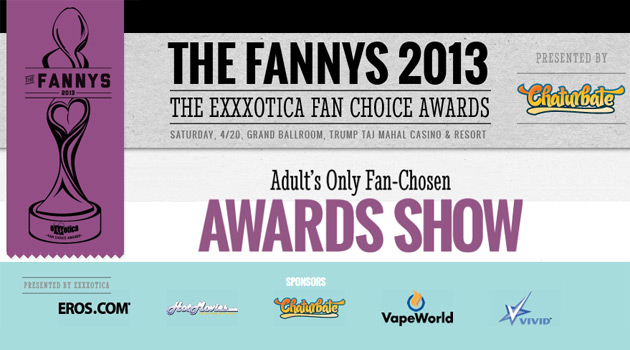 Adult’s hottest stars came out for the inaugural EXXXOTICA Fan Choice Awards on Saturday night in the Grand Ballroom of the Trump Taj Mahal Casino & Resort, as part of the first-ever EXXXOTICA Atlantic City.

Hosted by comedians and hosts of VH1’s “That Metal Show,” Don Jamieson and Jim Florentine, along with Adam and Eve contract star Alexis Texas, The Fannys instantly became a premier event with an incredible live show which a camera crew captured for future on demand cable broadcast.

The sold out show began with the “pink carpet” arrivals of the stars, celebrities and VIPs, hosted by the amazing Allie Haze. Once the carpet wrapped and the fans took their seats aside the stars, a brass band paraded from the entrance, over the pink carpet, and down the aisles to the main stage to kick-off the show. The hosts had the crowd laughing with their introductions of The Fannys and throughout the night, Jamieson, Florentine and Texas continued their on-stage entertainment.

Entertainment was one thing the show was filled with from start to finish. Adult superstar Stoya left jaws dropping and hands clapping with her sexy and riveting aerial ring act. She was a tough act to follow, but that’s what the Peek A Boo Revue did. The Philadelphia-based dance troupe, who have also appeared on “America’s Got Talent,” performed a choreographed dance number that the crowd flat-out loved. Rubberdoll, an EXXXOTICA favorite who has entertained crowds since 2007 in Miami Beach, took the stage towards the end of the night and left everyone on their feet with her sexy show.

The stars were in full force throughout the night, with an all-star list of presenters announcing the choices of the fans. It was a who’s who of adult in the list of dozens of presenters who were joined by other celebrities on stage such as former WWE Diva/Playboy covergirl and “Survivor: China” star Ashley Massaro, “Amish Mafia” cast member Crazy Dave, and pro wrestler, Snitsky. After over 250,000 votes were counted, trophy girls Lilly Banks, Raven Bay and Teal Conrad from LA Direct Models, handed out the custom made trophy designed by artist Fang Ling Lee.

Two very special awards were also presented for Lifetime Achievement. Tera Patrick received the first one and graciously accepted the award from presenters Charmane Star and Lisa Ann, thanking all of her fans, co-stars and friends. The second was presented to adult film legend Ron Jeremy, who was not able to attend due to his ongoing recovery from heart surgery, but instead taped an acceptance speech. Nina Hartley, Sunny Lane and Ed Powers introduced the most famous man in adult and the crowd gave a standing ovation for the recovering hall of famer.

Director of the Year – Stormy Daniels

Who’s Your Mommy? (MILF/Cougar of the Year) – Lisa Ann

TS, I <3 U (Transgender Performer of the Year) – TS Madison The Who (Underrated Star of the Year) – Johnny Castle Lifetime Achievement Awards – Ron Jeremy and Tera Patrick