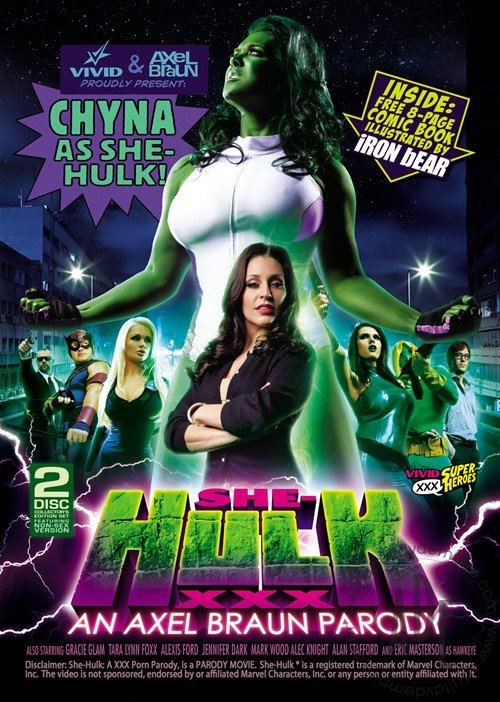 “Of all of the great female comic characters, She-Hulk is the one that I wanted most to play in a parody,” says Chyna. “This is the role I was destined for because I can identify with both her strength and her vulnerability.”

The film is directed by the undisputed Parody King Axel Braun, who has won more awards for his parodies of superhero characters than any other adult director. “Chyna was absolutely terrific and I don’t think I could have made the movie without her,” said Braun. “I can’t imagine any other adult or even mainstream actress in this role. She literally explodes off the screen.”

In the adult parody storyline, Chyna’s character is Jennifer Walters, an attorney and the cousin of Bruce Banner, aka The Incredible Hulk. When Jennifer is shot by a gunman working for mob boss Nicholas Trask, Banner performs an emergency transfusion, which saves her life but transforms her into She-Hulk.

The sex-filled, action-packed movie’s scenes are hot and fast-paced as Jen meets up with the Fantastic Four, the Hydra cell and other characters, including the Avengers’ marksman Hawkeye, played once again by the excellent Eric Masterson. Along with Chyna, the cast includes Gracie Glam, Tara Lynn Foxx, Alexis Ford, Jennifer Dark, Mark Wood, Alec Knight, Alan Stafford, Ryan Driller and Richie Calhoun as Bruce Banner.