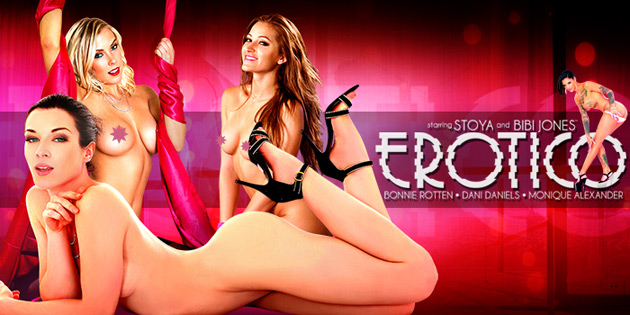 “There’s an eroticism to athletic women that is very powerful and primal,” said Stoya. “It’s in their focus, and their strength. It’s sexy and intense, maybe even dangerous when unbridled. That’s what the stories in Erotico present: women fueled by fantasy and adrenaline.”

Erotico has an all-star cast with a riveting storyline that conveys the unhindered sexual desires of five women. Stoya plays an injured ballerina who finds the will to get back on her feet to seduce ex-boyfriend James Deen on the ballet bar. Bibi Jones embraces her sadistic side with onscreen lover, Billy Bailey.

Bonnie Rotten plays a bad-girl boxer whose aggression is released in a sexy shower scene. Beach babe, Monique Alexander, goes the extra mile in satisfying peeping-tom, Jordan Ash. Finally, Dani Daniels ends up training her personal trainer to please her at will. Whatever your fantasy, Erotico is sure to please.

Here’s a safe-for-work trailer that gives you a sneak peek at what to expect from Erotico:

“Robby D has done a masterful job with Erotico. Visually enticing and thematically stimulating, the movie thrills on many levels,” said James Jakodema, creative director for Digital Playground. “It actually goes beyond what Digital Playground fans will expect. We look forward to their feedback.”

It’s as if Robby D read my mind and wrote Erotico just for me, as it features two of my favorite things: Girls working out (the sweatier the better), and Bibi Jones. I can’t wait to check this movie out!