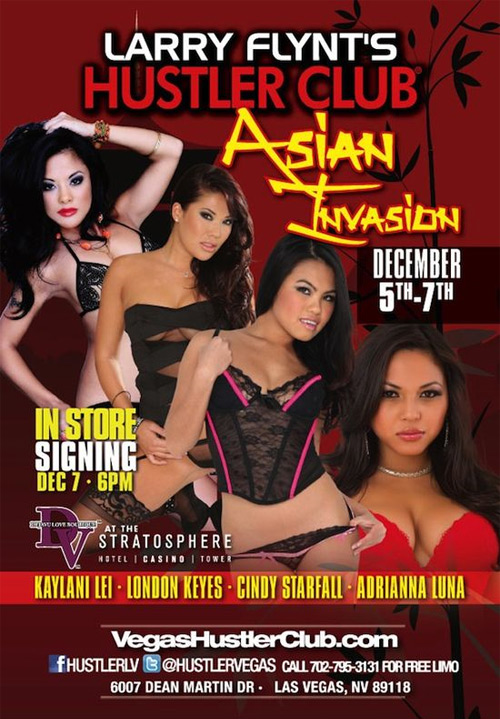 2014 AVN Fan-Voted Most Promising New Starlet nominee Cindy Starfall has only been performing for a year, yet she’s already established herself as a genuine and enthusiastic performer, appearing in over 100 adult scenes thus far.

“I can’t wait to perform at Larry Flynt’s Hustler Club!” Cindy said. “Feature dancing is a great way to meet fans and I’m looking forward to trying out some new, sexy moves on them.”

Cindy has even released a NSFW video tease in anticipation of her upcoming Hustler Club performance!

There will be an in-store signing on Saturday, December 7th at 6pm in the Deja Vu Love Boutique in the Stratosphere Hotel, and fans will be able to purchase signed DVDs, photos and other merchandise directly from the star. Make sure you purchase a copy of her film Slayin’ Asians, which recently earned her a 2014 XBiz Award nomination for Best Non-Feature Scene for her intense scene with actor Prince Yahshua.

For more information about the Asian Invasion, visit http://vegashustlerclub.com/newspost/asian-invasion/