Tyga To Perform At 2013 AVN Awards 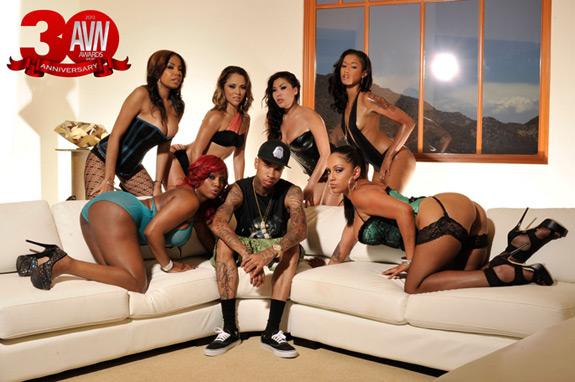 AVN Media Network is pleased to announce hip-hop sensation Tyga will be performing at the 2013 AVN Awards. Sin City will be renamed Rack City after the chart topping rapper performs at the show’s 30th anniversary celebration.

Tyga is hyped to perform at the awards show, an event he’s seen on TV.

The 22-year-old Los Angeles native has racked up five tracks in the past year alone that have hit the Billboard Hot 100 chart including “Far Away,” “Still Got It,” “Rack City,” “Faded” and “Make It Nasty.” His biggest single, “Rack City,” went double-platinum and became a Top 10 hit.

The AVN Awards historically has supported hip-hop and some of the genre’s biggest names have performed at the show including Flo Rida, Chingy, Lil’ Jon, Baby Bash, and Too Short.

“This upcoming awards show is very special and is a big milestone in the company’s history,” AVN Media Network CEO Theo Sapoutzis said. “We’re planning our biggest show yet to celebrate our 30th anniversary and we couldn’t be happier that Tyga is coming to perform. It’s going to be a blast.”

For the second straight year, the adult entertainment industry’s most prestigious night will be held at The Joint, inside the Hard Rock Hotel & Casino in Las Vegas, Nevada. Adult superstars Jesse Jane and Asa Akira will co-host the 2013 show.

A staple for 30 years, the AVN Awards show is the adult industry’s biggest night, while the awards themselves are the industry’s highest honor. With a stylish red carpet pre-show and lavish star-studded ceremony, AVN celebrates outstanding achievements in the world of adult entertainment.

Dubbed “the Oscars of adult” by Entertainment Weekly, the AVN Awards is a must-attend, must-see event featuring the hottest stars from adult and mainstream pop culture.

To purchase tickets for the 2013 AVN Awards, visit http://avnawards.avn.com/tickets/.