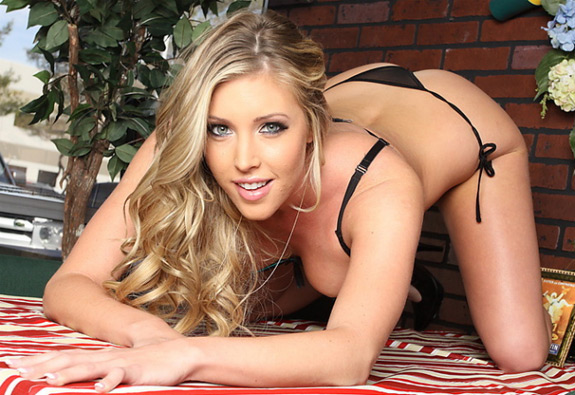 Wicked Pictures is pleased to announce that Samantha Saint will be joining the ranks of the company’s award-winning Wicked Girls. The announcement was made via Wicked’s flagship website, where Jessica Drake, Kaylani Lei and Alektra Blue introduced their newest contract sister in an exciting live web event.

A svelte, 5”8’ stunner hailing from the beautiful South, Samantha brings an impressive resume to the table that suggests she’ll feel right at home among her Wicked sisters. In both film and print, she’s worked tirelessly to establish herself at the forefront of adult entertainment.

As a successful model, she has graced the pages of Penthouse (she’s currently the coverstar and centerfold of the magazine’s October, 2012 issue), Club (including the January 2012 cover), Club International (the May 2011 cover), Hustler and many more.

In the adult film realm, Miss Saint (or as this Southern belle is known to her Twitter followers, @MissSaintXXX) has received award nominations for her work from both AVN and XBIZ. She’s no stranger to the world of Wicked Pictures, having already appeared in Jonathan Morgan’s Busty Cops and Ideal Companion. Next, she’ll be seen in Jonathan Morgan’s Couples Camp 2 and Brad Armstrong’s Just Visiting.

Given the sexy and stylish unveiling she enjoyed with her contract sisters today, Samantha’s thoughts on formally joining the company’s elite cadre of contract talent should come as no surprise. “I am so excited to be a part of the Wicked family! Becoming a Wicked girl is a dream come true. I know having such a wonderful company on my side will allow me to truly explore my sexual fantasies in the best light possible for my fans to enjoy.”

Oscar Wilde said the only difference between saints and sinners is that every saint has a past while every sinner has a future. With her dangerous curves and Southern charm, the only thing more exciting than where Samantha has been is where she’s going.