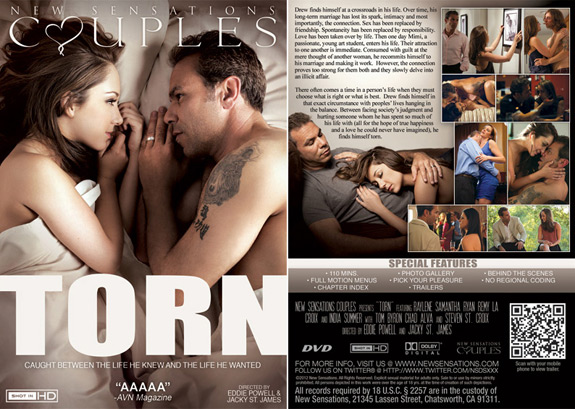 Torn marks the first installment of the company’s ‘Couples’ series which focuses on the trials and tribulations of relationships after the honeymoon has ended. The film, narrated by the character of Drew (St. Croix), centers around a man whose marriage lacks the intimacy and passion he craves and the choice he must make when a young art student enters his life and offers him everything he’s ever needed.

The film, pre-released to a handful of publications, has already earned the coveted ‘AAAAA’ review from AVN where guest reviewer, Paul Fishbein says, “Torn has the look and feel of a major motion picture but never loses the intimacy it needs to pull off all the elements (of the storyline). I can’t remember another adult feature in the 30 years I’ve been reviewing porn, which touches on this specific, universal subject with such grace and detail. This is a really great couples’ movie – one that I would encourage everyone to see. It’s affirmation that good features that aren’t parodies can still arouse and entertain.”