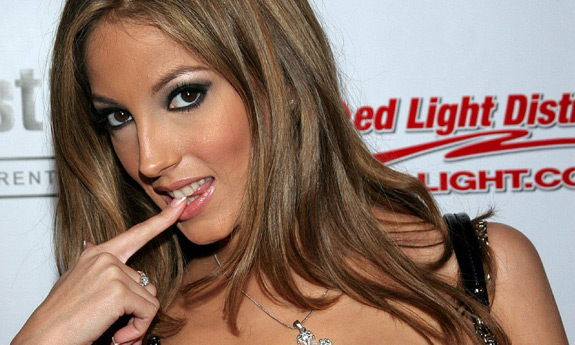 Jenna Haze, the most celebrated adult performer this century, has announced her retirement.

One of the top award winners of the past decade, Jenna was AVN’s 2003 Best New Starlet and in 2009 was named Female Performer of the Year by XRCO, XBIZ and AVN, the first performer to ever win the triple crown. She has also received many awards for her individual performances, feature dancing and directing. In 2009 she established her own production company, Jennaration X Studios, and has been producing and directing movies that consistently receive rave reviews. She was inducted into the AVN Hall of Fame last month.

“I always said that I would give up performing if I wasn’t going to be into it 100 percent,” she said. “Directing is where my heart is now. It’s allowed me to explore a creative side that is different from what performing has offered me. I am very satisfied with what I was able to accomplish in ten years of performing, and now I’m enjoying the challenges of being on the other side of the camera and running my studio.”

AVN celebrated her 10 year anniversary with a cover story last summer and her final scene was shot not long before that. This month she is featured on the cover of FHM with friend Taylor Momsen. She recently released a video goodbye on her YouTube channel, which can be viewed below:

“I’ve always had a very incredible and dedicated fanbase,” she said. “I’ve been thrilled with the reception to the movies I’ve directed the past three years and I hope they’ll continue watching what I do at Jennaration X. I’m going to give them every reason to.”

Jenna is also reworking her adult site to reflect the changes in her career and her shift towards mainstream. In the meantime, fans can still visit http://www.jenxstudios.com/. You can also follow Jenna Haze on Twitter at @JenXStudios.