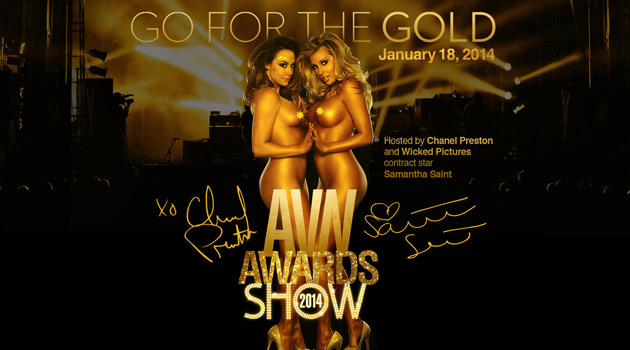 The AVN Awards, the biggest night in the adult entertainment industry, is once again set to take over The Joint at the Hard Rock Hotel & Casino in Las Vegas.

Both statuesque hosts are enjoying red-hot careers in front of the camera and see hosting the awards show as a high honor. The twin stunners both were nominated for Best New Starlet in their respective careers in addition to earning nominations for Female Performer of the Year at this year’s show.

“It’s truly an honor to be selected to host the AVN Awards,” said Chanel Preston, who also served as the show’s trophy girl in 2011. “I’m grateful AVN chose me and I’m already a bit nervous. I think hosting the AVN Awards is the most high-profile job in the industry. I’ve been nominated for big awards, I’ve been the trophy girl, but nothing can compare to the magnitude of hosting such a big show. I’m totally ready for this and I can’t wait until the big night! Now I need to start looking for dresses.”

Preston, a native Alaskan who began her career in adult entertainment in 2010 for Vivid’s Brand New Faces series, has ascended the ranks to become one of the industry’s top performers known for both her volcanic sex scenes and her skilled acting performances. She’s toplined numerous high-profile features, parodies and all-sex releases for all the major companies.

Both stars were named Penthouse Pets in 2012 — Preston in February and Saint in October.

Speaking of Samantha Saint, the Memphis-born stunner exudes warm Southern charm. The lithe blonde beauty is the newest Wicked Pictures contract star and her latest films for the company, Saint and Sinners and Secret Admirer, are now in stores.

“I’m super excited to be hosting the biggest night in the industry,” Saint said. “It’s an honor to be asked to do this and I know it will be a huge highlight in my career, not only to host, but to represent Wicked on stage as well. I’m going to make the most of it.”

Saint has graced the covers of Penthouse, Club, Club International, Hustler, and many more.

“Oh my God, I love her,” Saint said of Preston. “I was so excited to find out we were hosting together. I think it’s the perfect match; we’re both tall and I’m the blond and she’s the brunette. We get along and play off each other very well—we click. I’m always thrilled to see her, but now to host the AVN Awards together is going to be a blast.”

Celebrating its 31st year in 2014, the AVN Awards show is the adult industry’s biggest night, and the awards themselves are the industry’s highest honor. With a stylish red carpet pre-show and lavish star-studded ceremony, AVN celebrates outstanding achievements in the world of adult entertainment.

Dubbed “the Oscars of adult” by Entertainment Weekly, the AVN Awards is a must-attend, must-see event featuring the hottest stars from adult and mainstream pop culture.